President Donald J. Trump on Aug. 23 signed the “Small Business Reorganization Act of 2019” (H.R. 3311), “HAVEN Act” (H.R. 2938) and “Family Farmer Relief Act of 2019” (H.R. 2336) into law. The bipartisan bills, which ABI testified in support of in June, passed the House in late July and the Senate on August 1. Experts will provide an overview of the new laws and how they will help financially distressed small businesses, disabled veterans and family farmers going forward. 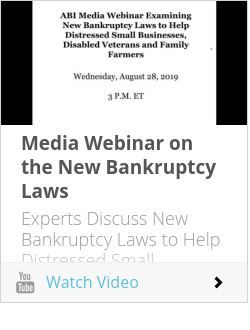 Robert J. Keach is a shareholder at Bernstein, Shur, Sawyer & Nelson in Portland, Maine. He is a Fellow of the American College of Bankruptcy and a Past President (2009-2010) of the American Bankruptcy Institute (ABI). Keach is also the co-chair of the ABI’s Commission to Study the Reform of Chapter 11. Keach testified on ABI’s behalf in support of H.R. 3311, H.R. 2938 and H.R. 2336 before the House Judiciary Committee Subcommittee on Antitrust, Commercial and Administrative Law on June 25.

Kristina Stanger is an attorney and shareholder with Nyemaster Goode, P.C. in Des Moines, Iowa, where she focuses her practice on creditors’ rights and bankruptcy. In addition to her legal practice, Stanger is a combat-experienced Lieutenant Colonel in the Iowa Army National Guard and a 2017 AMEDD Iron Major. She has served more than 20 years as an enlisted soldier, commander and planner for state, national and international operations. Stanger was named to ABI’s 2018 “40 under 40” Class, an annual program that recognizes 40 of the top insolvency industry professionals under the age of 40.

Jessica Hopton Youngberg assists low-income veterans through the Veterans Legal Services clinic at the New England Center & Home for Veterans in Boston. She assists clients with a variety of civil matters, including landlord/tenant, public benefits, consumer debt and family law.

Joseph A. Peiffer of Ag & Business Legal Strategies in Cedar Rapids, Iowa, is an attorney with more than 30 years of bankruptcy and agricultural law experience. During the farm crisis of the 1980s, Peiffer served as the law clerk for the busiest bankruptcy judge in the country. After that clerkship, he began representing family farmers to assist them with their financial problems.

Donald L. Swanson, a shareholder in Koley Jessen in Omaha, Neb., has been practicing bankruptcy law since 1980. During the 1980s farm crisis, Swanson represented debtors in more than 40 chapter 12 cases, achieving a confirmed plan and discharge in all but one. He publishes a blog on bankruptcy and mediation at www.mediatbankry.com.

ABI Executive Director Samuel J. Gerdano is frequently called on by the local and national media as an expert on bankruptcy-related matters and cited as an authority on the matter. From 1985 to 1991, Gerdano was the chief legal counsel to Senator Charles E. Grassley (R-Iowa) and staff director for the Senate Judiciary Subcommittee on Courts and Administrative Practice (now known as the Subcommittee on Bankruptcy and the Courts).

H.R. 3311, the “Small Business Reorganization Act of 2019” (SBRA), which will take effect in February 2020, adds a new subchapter V to chapter 11, providing a better path for small businesses to successfully restructure, reduce liquidations, save jobs and increase recoveries to creditors while recognizing the value provided by entrepreneurs. It adopts the current definition of a “small business debtor” as a person in commercial or business activity with aggregate or noncontingent liquidated secured and unsecured debts as of its bankruptcy filing date of not more than $2,725,625. It is estimated that about half the chapter 11 cases filed today could qualify for subchapter V treatment.

H.R. 2938, the “Honoring American Veterans in Extreme Need Act of 2019” (HAVEN Act), was introduced on May 23 in the House by Reps. Lucy McBath (D-Ga.) and Greg Steube (R-Fla.) to exclude VA and DoD disability payments from the monthly income calculation used for bankruptcy means testing. ABI Veterans Affairs Task Force Member Holly Petraeus, a former assistant director of the Consumer Financial Protection Bureau,testified in favor of the bill on behalf of the Task Force before the House Judiciary Committee. ABI’s Commission on Consumer Bankruptcy also endorsed the provision.

H.R. 2336, the “Family Farmer Relief Act of 2019 ,” was introduced on April 18 in the House by Rep. Antonio Delgado (D-N.Y.) to update chapter 12 of the U.S. Bankruptcy Code to reflect the economic challenges facing distressed farmers. The debt limit for chapter 12 filings had been $4.3 million; H.R. 2336 raises this limit to $10 million. Farm sizes have increased substantially since 1986; meanwhile, net farm income has declined since 2013. A survey released on Aug. 15 by the Federal Reserve Bank of Chicago found that Midwest bankers were reporting that the percentage of farm loans their customers are having problems repaying hit a 20-year high in the second quarter of this year.

What are the key provisions of the new laws? How will these new laws help struggling small businesses, disabled veterans and family farmers going forward? ABI’s media webinar features experts who advocated for the passage of the legislation; they will provide an overview of each law and take questions. If you would like to participate or have any questions about the webinar, please contact ABI Public Affairs Manager John Hartgen at [email protected] or 703-894-5935.