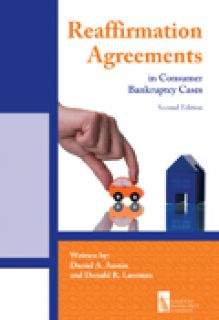 The first edition of Reaffirmation Agreements in Consumer Bankruptcy Cases addressed what to expect under BAPCPA when consumer debtors want to reaffirm their debts. The financial crisis has since significantly altered the landscape for consumer debt reaffirmations, prompting renewed scrutiny by debtors, creditors and bankruptcy courts. This Second Edition provides an expanded update of reaffirmation essentials, including the necessity, timing and content of reaffirmation agreements. In addition, it addresses cutting-edge issues such as loan modifications, post-discharge litigation and increased involvement by bankruptcy courts. The handbook discusses the relevant Bankruptcy Code sections and addresses the December 2009 changes to the Federal Rules of Bankruptcy Procedure. It also includes reaffirmation statistics, a sample letter for creditors and a state-by-state comparison of enforcement of ipso facto provisions. The handbook provides essential information and guidance for debtor and creditor practitioners and clients.