Support for Scholars on Important Research

The ABI Endowment recently awarded a grant to the University of California Hastings College of Law, on behalf of its faculty member Prof. Jared Ellias (ABI 2020 40 Under 40 Honoree) for a study titled “Bankruptcy Trauma.” Among bankruptcy practitioners and in the academic literature, there is a strong belief that filing for Chapter 11 hurts a corporation. In bankruptcy practice, this theory that Chapter 11 harms businesses often leads managers to avoid or delay filing for bankruptcy – even when doing so would unlock tools that could help restructure the business – and bankruptcy judges to abridge and limit the process created by Congress. In the academic literature, the damage bankruptcy does to a corporation is often characterized as an “indirect cost” of bankruptcy, and these indirect costs are thought to be important reasons why firms choose to avoid using too much debt. Despite the influence of this belief in practice and in the academic literature, it largely rests on an untested empirical foundation. Prof. Ellias intends to develop a study that will offer an unprecedented glimpse into how Chapter 11 impacts a firm’s ability to recruit and retain employees, how consumers respond to the Chapter 11 filing of a retailer and how a bankruptcy filing affects subsequent news coverage of reorganized firms.

The Task Force on Veterans' and Servicemembers' Affairs (2018 - Present)

Those who have served our country in the military are treated less favorably under the U.S. Bankruptcy Code than those who haven’t, and veterans and servicemembers face different challenges in dealing with personal debt issues that civilians don’t encounter. For these reasons, ABI President Ted Gavin has committed the talents and expertise of ABI’s volunteers to researching and proposing solutions for these problems.

The Task Force on Veterans' and Servicemembers' Affairs — which will be financed in part by a grant from the ABI Endowment Fund and will be under the leadership of former ABI Presidents John Ames and John Penn, two-time ABI Resident Scholar Jack Williams, and Prof. Nancy Rapoport, who will serve as Reporter — has assembled more than two dozen enthusiastic volunteers from ABI membership as well as from the public sector. The Task Force will focus on two major goals. First, it will provide information regarding the HAVEN Act, which proposes to remove veterans' disability benefits from the calculation of income under the means test. Second, it will develop a financial support group for the military, similar to CARE, with volunteers trained to help veterans and current servicemembers better understand credit issues.

The group has formed committees focused on Legislative Affairs, Financial Education & Counseling, Outreach, Pro Bono matters and Tribal Affairs (Native Americans are, as a group, overrepresented in the U.S. Armed Forces — over 50% generally and over 200% in the Marine Corps; the overrepresentation increases when only counting female members). These groups are already hard at work. For instance, the Outreach Committee has already established relationships with a number of groups to determine what they are doing and how ABI's efforts can be complementary.

In April 2019, ABI released the Final Report of the ABI Commission on Consumer Bankruptcy, funded by grants from the Anthony H.N. Schnelling Endowment. The 250-page report contains approximately fifty discrete recommendations for reform of the consumer bankruptcy system. The Report is the product of a three year study by an expert panel and contains recommended improvements that can be implemented within the existing structure. The Commission's aim was to modernize the system with practical and cost-effective recommendations, building on the framework established by Bankruptcy Code of 1978 and Bankruptcy Abuse Prevention and Consumer Protection Act of 2005. The Commission employed an open, information-gathering model that allowed interested parties across the consumer bankruptcy spectrum to provide input. The Final Report has been distributed to all U.S. bankruptcy judges, the Committee on Bankruptcy Rules and members of Congress.

For more information on the Consumer Commission click here.

Endowment-Funded Study to Look at Effect of ACA (2016 - Present)

An empirical study to examine if the expansion of Medicaid through the Affordable Care Act (ACA) has had a correlative effect on the rate of consumer bankruptcy filings across the country. The study, “Consumer Bankruptcy and The Patient Protection and Affordable Care Act: Placebo or Panacea?” is a ground-breaking look at these issues and will take place over 2-3 years with the results published in the ABI Law Review.

The principal researchers for the study are Prof. Brook E. Gotberg of the University of Missouri School of Law and Prof. Michael D. Sousa of the University of Denver Sturm College of Law. “Finding a preliminary answer to this question may have great ramifications on the perceived success or failure of the nation’s health care system as well on the bankruptcy system’s social insurance function to thousands of consumer debtors who suffer under the weight of medical debt,” according to Gotberg and Sousa.

The American Bankruptcy Institute (ABI) Anthony H.N. Schnelling Endowment Fund has commissioned a study to test whether original, re-conceived consumer education materials have a positive effect upon the financial health of struggling individuals. Profs. Lois R. Lupica of the University of Maine School of Law, D. James Greiner of Harvard Law School and Dalié Jiménez of the University of Connecticut School of Law will be conducting the research. The empirical study “allows us to link the dollars spent on various legal interventions and the incidence of bankruptcy filings,” according to the researchers. Read more.

The American Bankruptcy Institute (ABI) Anthony H.N. Schnelling Endowment Fund commissioned an empirical study to examine how and why individuals decide between chapter 11 and chapter 13 when filing for bankruptcy. The ABI Individual Chapter 11 Study explored the reasons behind individuals filing for bankruptcy under chapter 11, which is generally more expensive and more complicated than filing under chapter 13.

The study, which was featured in the American Bankruptcy Institute (ABI) Winter 2017 Law Review (Volume 25, No. 1), found that individuals account for more than a quarter of chapter 11 bankruptcy filings, and this share has grown over time. “Some debtors may be forced into chapter 11 by chapter 13's debt limits, but many debtors who are eligible for chapter 13 choose chapter 11,” writes Profs. Richard M. Hynes, principal investigator, Anne Lawton, associate investigator and Margaret Howard, reporter for the “National Study of Individual Chapter 11 Bankruptcies.” “Perhaps the hybrid nature of individual chapter 11 cases is justified because the individuals who use chapter 11 look like a blend of the typical chapter 13 debtor and a small business: they have much greater assets, debts, income and expenses, and the overwhelming majority are operating some type of business,” they write.

Commission to Study the Reform of Chapter 11

ABI and the Endowment Fund supported a comprehensive study of how to reform and modernize the process in complex corporate cases. The 20-member commission of noted experts was assisted by more than 130 experienced professionals from the fields of law, turnaround management, finance, the judiciary and academia. The final report can be found at commission.abi.org..

In 2011, the ABI Endowment Fund awarded $40,000 over two years to fund the work of the ABI Ethics Task Force regarding national standards of practice for bankruptcy professionals. The final report was published in April 2013 and can be read here: Final Report of the ABI National Ethics Task Force.

In 2012, the ABI Endowment awarded $20,500 to the University of Maine School of Law (Lois Lupica, investigator) for an empirical study of whether BAPCPA has resulted in decreased distributions to unsecured creditors.

The new study follows and builds on earlier work by Prof. Lupica.

The ABI Endowment Fund awarded a $155,000 grant in 2009 to Professor Lois R. Lupica at the University of Maine School of Law for a comprehensive study of whether the Bankruptcy Abuse Prevention and Consumer Protection Act of 2005 (BAPCPA) has substantially increased the costs of bankruptcy for consumer debtors and their creditors. Many experts and advocates have expressed concern that BAPCPA has significantly raised costs for consumer debtors and their creditors since its enactment in October 2005 because of the additional fees and conditions that must be met for a consumer to file and receive a discharge.

Prof. Lupica, a former ABI Resident Scholar, released her final report in December 2011, following the results of a pilot study presented at ABI’s 2009 Winter Leadership Conference. Click here to read the report. Her study is also supported by a grant from the NCBJ Endowment.

The ABI Endowment Fund awarded $346,000 in 2005 for a ground-breaking study which revealed that numerous factors, such as the presence of creditors' committees, influenced the total professional costs of chapter 11 bankruptcy cases. Study reporter Stephen J. Lubben, the Daniel J. Moore Professor of Law at Seton Hall University School of Law, looked at more than 1,000 chapter 11 bankruptcy cases that were filed in 2004. The findings were released at ABI's 2007 Winter Leadership Conference. Click here to read the report.

"The fee study represents the most comprehensive set of data of a large sample of chapter 11 cases ever compiled by an independent empirical study," said Chip Bowles Jr. of Greenbaum Doll & McDonald PLLC (Louisville, Ky.), the chairman of ABI's professional fee study advisory board. "It constitutes a vital source of information about both the implications of the compensation of professionals in chapter 11 as well as the practice of chapter 11 cases in general. The high quality and vast quantity of data gathered by the fee study shows that ABI's faith in the project and the reporter was well-placed."

In 2008, the ABI Endowment provided $50,000 in support of a major academic conference on the causes and consequences of debt. An international galaxy of scholars, including Prof. Elizabeth Warren of Harvard Law School, addressed debt from a variety of perspectives such as law, finance, history, psychology, philosophy and neuroscience. The resulting papers will be published in 2010 by Oxford University press. 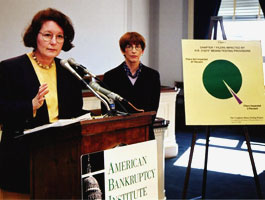 The Endowment's first grant was awarded in 1998 to Prof. Marianne Culhane and Prof. Michaela White of Creighton University School of Law. Culhane and White produced an empirical study of the repayment capacity of chapter 7 debtors under the means test then under consideration by Congress. The widely cited study provided critical guidance to Congress as it considered "needs-based" bankruptcy. The success of the first grant launched the ABI Endowment Fund as a significant source for academic funding on important research topics.

The Endowment financially supports both the ABI Chief Judge Conrad B. Duberstein Memorial National Bankruptcy Moot Court Competition for law schools and the ABI Corporate Restructuring Competition for graduate business schools. These competitions will help form the next generation of skilled professionals.

Other Grants on Consumer and Business Bankruptcy Topics